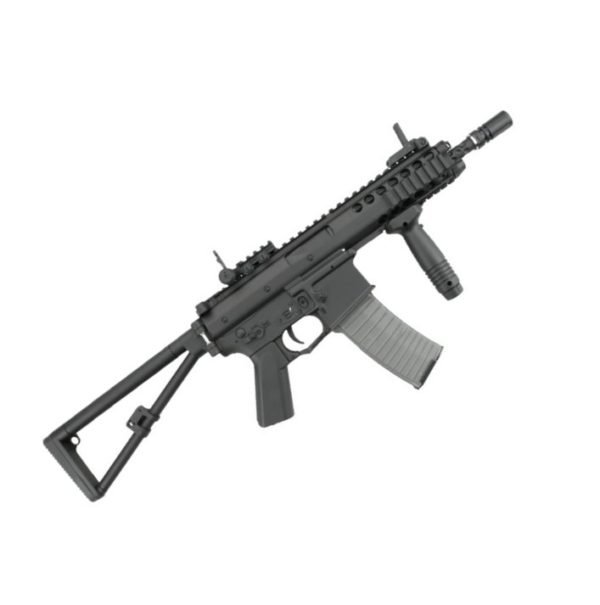 The elements which characterize this model among other PDW (Personal Defense Weapon – carbines/sub-machineguns in their shortest and lightest versions designed for helicopter crews, tank crews and drivers as a defensive weapon which can auto fire the AUTO firing mode) is its size, weight and, foremost, its versatility for both, left and right handed shooters. The replica is equipped with an ambidextrous firing mode selector lever thanks to which you can change the firing mode with the thumb or the index finger of both hands, it is also equipped with the so-called “multi magazine catch” – the ambidextrous magazine release lever. The weapon’s body is also equipped with a QD type attachment point.

The replica is equipped with a stock foldable to the side and which also minimizes the replica to the minimum of 450mm. On the top mounting rail, there are mounted the “flip up” type iron aiming sights which are perfectly made and, foremost, are functional and durable. After pulling the cocking handle, the bolt dummy reveals the Hop-Up adjustment knob.

The magazine which is included in the set is made of ABS plastic.

The battery which is includes in the set is placed in the laser target marker dummy.
The whole is mounted on the front grip thanks to the RIS rail.

Inside of the replica, there is a V2 gearbox which is made of metal.

– the replica;
– a magazine;
– a battery ( with the laser target marker dummy );
– a charger
– front tactical grip;
– iron aiming sights;

FPS is -370 So will need spring downgrade.

Be the first to review “PDW BY-808 replica” Cancel reply