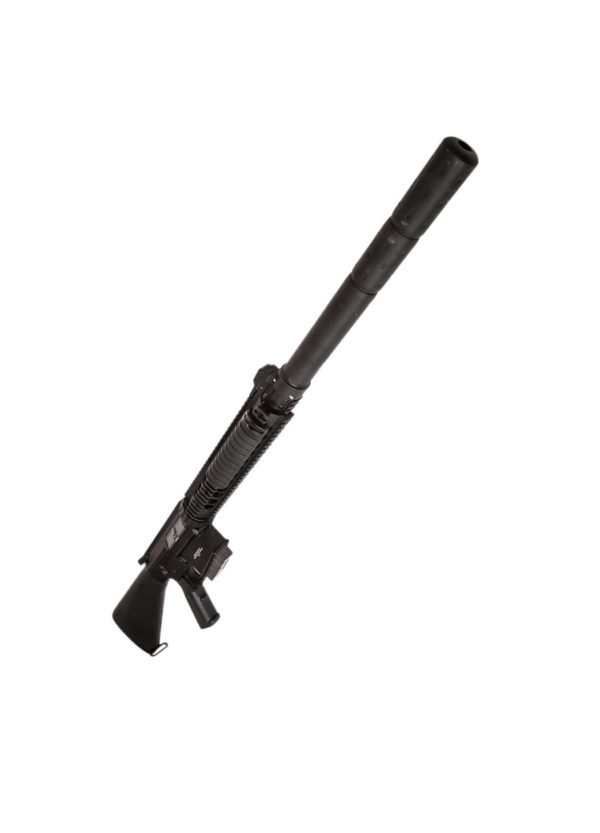 A 6mm BB Airsoft Electric Gun based on the SR25 Designated Marksmans Rifle, and represents one of the best value for money ways of getting into the world of Airsoft DMRs. Designed to be ready to use on the skirmish field as a Long Range DMR straight from the box, the GR25 is Locked to semi automatic, and features reinforced internals.

The most prominent feature of this replica is the huge 33cm long Over Barrel Suppressor, which realistically slots over the Outer Barrel. Just like the real thing, the GR25 features an all Alloy, Free Float Handguard and Barrel set, a combination which ensures users get the best possible accuracy from their GR25. The Handguard features quad 20mm RIS Rails, allowing the installation of a wide variety of Weapon Tactical Accessories; from Foregrips and Grenade Launchers, to Laser / Light Modules. A 20mm RIS Sniper Bipod Mount is supplied, along with 3 KAC Style short Rail Covers allowing users to create an Ergonomic Handguard. The mock Gas block is Low Profile, allowing users to install Optical Sights and Scopes on the Upper RIS Rail, without worrying about the Gas Block obscuring their view. If you’re an Airsofter thinking about playing as a Marksman, then the GR25 is an excellent choice; no need to modify it in any way, as this AEG is ready take long-range shots right out of the box!