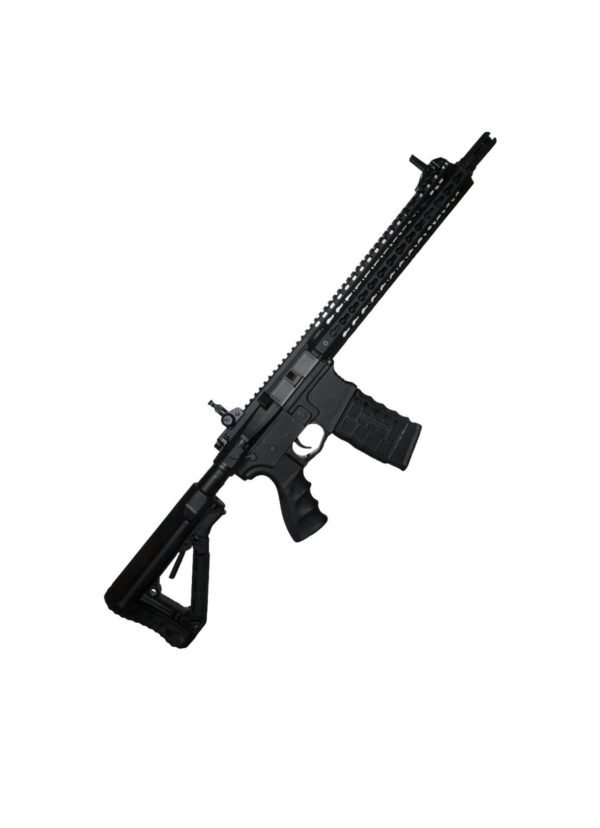 An Airsoft 6mm BB Gun, base on the AR Platform of Rifles, with updated furniture to bring it into the Modern Era. The rifle features a Polymer Body, with a Polymer Receiver, Pistol Grip, Magazine and Stock, with Alloy Internals, Buffer Tube, Hand guard, Outer Barrel Assembly and Sights.

The Rifle has a multitude of features usually seen in high range Airsoft guns, making this an easy purchase. The gun is powered by Electric, and features a V2 Rear Wired Gearbox, and is powered by 11.1v LiPo Batteries. The weapon features G&G’s ETU Programmable Trigger System, which adds a range of intelligent features to the Gun, such as auto cut-off when the battery is low, and a programmable trigger system which can be switched between Full Auto and Burst Fire modes without any additional equipment. Externally the weapon features a Keymod Hand guard System, which allows for a wide range of aftermarket KeyMod parts and accessories to be added, such as rail panels, grips, bipods, torches and Lasers. The weapon also features a full length 20mm RIS / RAS Top Rail, which is compatible with most Sights and Scopes, allowing for large Scopes or Holographic and Magnifier Setups. The weapon comes fitted with a Six Position Adjustable GOS-V3 Retractable Stock System, which features a CR123A battery storage compartment, a common battery used in Torches and Lasers. The Stock is also where the batteries are stored to power the gun, allowing for Crane Stock / Butterfly batteries to be used, and connected to the Mini-Tamiya connector. This gun is perfect for those Airsoft Skirmishers who are looking for a high quality weapon, with tonnes of features that would have even the most veteran of Airsoft Players interested.