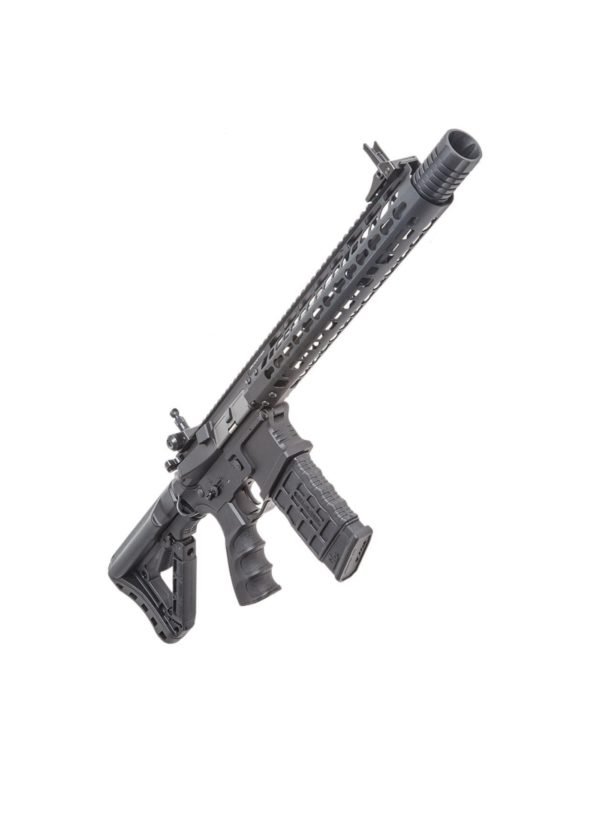 An Airsoft 6mm BB Gun, based on the M4, this is the latest version of the G&G Combat Machine. The weapon is constructed almost entirely from polymer including the Receiver, Stock, Pistol Grip with parts like the Magazine and Stock Tube being alloy.

The weapon has a high attention to detail, giving the user a multitude of features only seen on Expensive High-End Guns, such as the Ambidextrous Fire Select, Magazine Release, aswell as an in-built MOSFET Unit, Electronic Trigger and Fuse System. The Flash-Hider of the weapon is designed to enhance the noise output of the rifle, making it sound louder than traditional AEG, letting the enemy know your intentions quite clearly. The MOSFET protects the gun from damage, aswell as includes a three round burst mode which replaces the full-auto function if needed. The top of the weapon features a full length 20mm RIS / RAS Rail Panel, allowing the attachment of a variety of Scopes and Sights. The hand-guard features a Key-Mod Rail system, allowing you to attach a variety of KeyMod Rail Attachments, such as Foregrips, Rail Panels and more. The magazine is unique to the G&G Range, featuring a Rubber Hand Molded Grip, giving extra hold and stability on the magazine. The stock of the weapon is multi-position adjustable, featuring a rubber butt stock for extra grip, aswell as a textured cheek rest. This gun is perfect for new and old Skirmishers alike, giving you a range of features which are usually seen only in high-end weapons, but at a great price.

*Please note, that G&G will only warranty ETU G&G Rifles which use up to a maximum of a 15c Discharge LiPo, please use the recommended battery: GIANT POWER – 11.1V 1300mAh 15c LiPo Crane Stock Battery, to avoid voiding your warranty*

To switch the weapon to Three Round Burst, hold the trigger down in semi-automatic for 10 seconds and release.